This time about 40 members of staff from across the University (five of the seven faculties were represented, in addition to SAS) were in attendance as colleagues from the Faculty of Science & Engineering and the Faculty of Health, Psychology and Social Care treated them to some innovative hands-on activities. These included: electrical engineering challenges, facial morphing, and of course poetry writing. 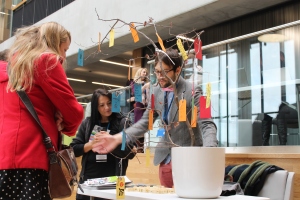 One of the main pieces of feedback from the previous Creative Spaces event was that participants would have liked the opportunity to discuss interdisciplinary collaboration and potential barriers to this. As such, following the demonstrations and lunch (which was once again provided by the outstanding Haleh Movarej and MetMunch), some of the participants met for a facilitated discussion on how to take things forward. The following three points summarise this discussion:

Haleh and MetMunch cook up a creative feast!

Creative Spaces 2 help to facilitate some very useful interdisciplinary conversations, and it was also a lot of fun. In particular it has helped to further develop the relationship between the Faculty of Science & Engineering and the Faculty of Health, Psychology and Social Care, with some collaborative projects now firmly in the pipeline.

For future events it would be great to see even more staff involved, and to potentially host the event in the building of another Faculty, as moving it from John Dalton worked so well. Look out for Creative Spaces 3 in about 4-5 months tines, and if you want to get involved then please do get in touch.

Thank you to everyone that attended, both as a participant and a demonstrator. Special thanks to Hannah Fawcett, Senior Lecturer in Psychology, who helped to put the whole event together, as well as to Haleh Morvaj and the MetMunch team for providing such delicious and healthy food.