This was a project funded by the Global Challenges Research Fund aimed to empower women leaders from fishing communities in the Dique channel area of Colombia. Women play a pivotal role in the foundation of family structure, social stability in Colombian coastal areas. Here, subsistence fishing sustains family and community cohesion, however, severe environmental (e.g. erosion, overfishing) and social (e.g. violence, displacement and gender inequality) pressures have resulted in destabilisation and impoverishment of all living communities.

This followed from a project called FISHING FOR LIFE (www.pescandoparalavida.org ) where 5 women and 22 men were trained as leaders in the area.

Manchester Met’s Dr Lina Barrios, herself a Colombian national, was part of the original team and saw that the women were a minority who were largely ignored when it came to taking decisions as a community. She thus resolved to return with a team to work with a similar group of women.

So, a team from Manchester Met, including Valeria Vargas (also a Colombian national), Lina, and myself, Alicia Prowse, ran a 6-day residency at the Granja Lismar acquaculture farm near Santa Lucia, Atlantico region. The farm has a training room (below) with attached dormitory which housed the 25 participants.  An outdoor classroom provided space for yoga, reflection, more formalised learning and discussion…as well as dancing and partying on the final night.

My experience both with learning and teaching for adult learners (I work in CELT) and with global citizenship – a thread that ran through this project – was the basis for my participation.  Soft global citizenship is a term sometimes used to describe a process where the global north see the global south as poor, needy and helpless, prompting responses which tend to reinforce the status quo, preventing more searching questions being asked. A more critical global citizenship might instead prompt questions around the reasons for injustice and poverty and to seek for solutions that include all voices, not just those more privileged ones.

The outdoor classroom was challenging and lively as the women engaged in learning more about their own networks, their potential for leadership and entrepreneurship and their ideas about empowerment, all set in the context of livelihoods for sustainable development. There was also input around technical aspects of aquaculture such as injection of hormones to stimulate spawning.  Sometimes, classroom work was interrupted as the aquaculture tanks hummed and growled with the sounds of spawning fish.

Facilitating workshops in this environment required a focus that ignored the eagles, woodpeckers and other wildlife that regularly floated past the wall-less classroom, and an ability to work with the passionate commitment of the participants many of whom would stand up to give clear and heartfelt speeches about their own views.

Personally my own challenge was my unrealistic expectations about my linguistic facility in Spanish – my colleagues helped me out with translation but I was very disappointed not to be able to join in all the discussion.  It was humbling that my expertise (in teaching and learning) felt so inadequate in this context and it made me feel renewed respect for colleagues who teach in languages that are not their first.

At the beginning of the residency the women talked a lot about their ‘lack’ – of resources such as land, or finance or support. Towards the end of the week, they began to recognise the power of their own networks and their abilities to rely on their own resources.

We were on the border between two administrative areas: one area had a women’s minister (who we invited to come) and the other did not. In preparation for the visit, we asked the women what they might want to ask of a women’s minister. By this time, at the end of the residency, they decided that they had all they needed to get started on an entrepreneurial venture.  So, instead, they decided to ask for a more ‘political’ kind of support.

When they did so, her response was to immediately collect together the women leaders from the adjoining area and to make a phone call, there and then, to a political colleague using the women’s voices as evidence of grassroots support for the initiative. Two days later some of the women met with this colleague and began the process of formal lobbying for a women’s minister in their area.

We envisage that this will be the beginning of a process that will take some time to come to fruition but we hope to continue working with these women through our partners  at the University of Cartagena.  In the meantime, we have a thriving WhatsApp group that we have been added to that helps all women to sustain and grow their networks.

If you would like to hear more. Here is the link to a short podcast

Alicia Prowse and Rachel Forsyth participated in the CARPE network conference in Hamburg last week. This network brings together six European universities which have agreed to collaborate in research and teaching, and Manchester Met has been a partner since 2012.

Since 2013, CELT has been involved in the development of the ‘Teacher Hub’ in the network, which aims to support academic staff who want to work with their counterparts in other institutions to develop shared teaching, joint awards, shared resources and exchanges of staff and students. The Teacher Hub held a joint simultaneous summer school for staff in June 2016 and has facilitated some small-scale projects such as the INternationalising STudent Education in Physiotherapy (INSTEP) initiative. At the conference, we ran workshops on internationalisation and staff development.

We have come back with a list of subject areas where our partners are looking for collaborations and a plan to run a short online course across the network which will help colleagues to make connections and think about accessible ways to internationalise their existing courses or introduce opportunities for staff and student mobility. The subject areas where people have suggested collaboration are:

We also had interest from colleagues interested in more general topics related to teaching or research: the use of narratives and story-telling in teaching and in arts practice, coaching, learning teams, cultural differences, online learning.

If you would like to find out more, please get in touch.

Picture: What else would you eat for a conference lunch in Hamburg?

The University has been awarded funding to provide travel grants of up to €275 and subsistence grants of up to €160 per day (depending on destination) for approximately 90 Manchester Met staff members to undertake a teaching or training exchange at one of our European partner universities. Manchester Met’s Erasmus partners are listed on the International website. All our European institutional agreements can support staff mobility, though your mobility will have to be confirmed by the host institution to take place. Teaching mobility places will be proportionally allocated based on staff numbers in each faculty. Up to 20 training mobility places will be allocated to non-academic staff.

Applications from staff members who have not previously benefitted from Erasmus funding for teaching or training mobility will be prioritised.

Applications should be submitted to James Rothwell (j.rothwell@mmu.ac.uk) by Friday 10th November 2017.

If you have any questions about Erasmus Staff Mobility please contact James Rothwell in the International Office – email:  j.rothwell@mmu.ac.uk tel: 0161 247 6732. 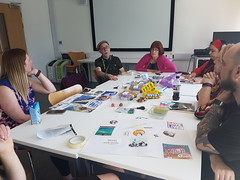 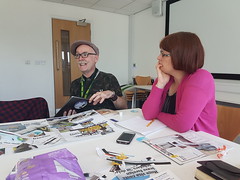 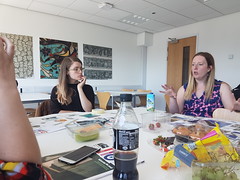